I have never been particularly happy about the way I teach factorising non-monic quadratics (quadratics where the coefficient of x2 is greater than 1). My students can follow the method I use but often forget it in tests and assessments and don’t really understand the mechanics behind it. Inspired by Jo Morgan’s new book, A Compendium of Mathematical Methods, our maths department explored six methods of factorising non-monics. We did this at a recent department meeting. I have described the method briefly for each technique as I solve the same quadratic: 6x2 – 5x – 4, with some comments. We also voted as a department on our favourite method to teach – results are at the end.

This is the method I was taught as a student and the one I’ve promoted most in my 10 years of teaching (how often is that the case?!). It’s probably the most widely taught method amongst our department. It is quite straightforward but does need students to remember the steps. It’s not clear why the splitting of the middle term has to done in the given way. Also, the step 3 to 4 isn’t natural for students if they haven’t practised factorising expressions in the form of a(x + y) + b(x + y).

I like this method. I had not seen it before reading Jo Morgan’s book but it makes a lot of sense. It isn’t the quickest and I probably wouldn’t use it when factorising quadratics myself, but I can imagine teaching it. There are links to be made here with disguised quadratics that students will meet in Year 12. Note that we wouldn’t have had to multiply through by 6 is the first term was already a perfect square, such as a 9x2 or 25x2. However, as I was presenting this method, I sensed that departmental colleagues thought it/I was overcomplicating the whole thing!

I first heard of this method from a colleague who heard it from a student at a local school called Howell’s (hence our school’s name for it!). That colleague, @MissAyresCHS, presented this method to the department as her preferred method. The ‘Lyszkowski’ refers to Richard Lyszkowski who published the method is a mathematical journal in 1999. At first glance I didn’t like it because the first step seemed alien. However, having seen the non-monic to monic method (above) it makes more mathematical sense as it’s just that method but without some of the steps. The omission of steps does speed up the process but does arguably take away some of the understanding. 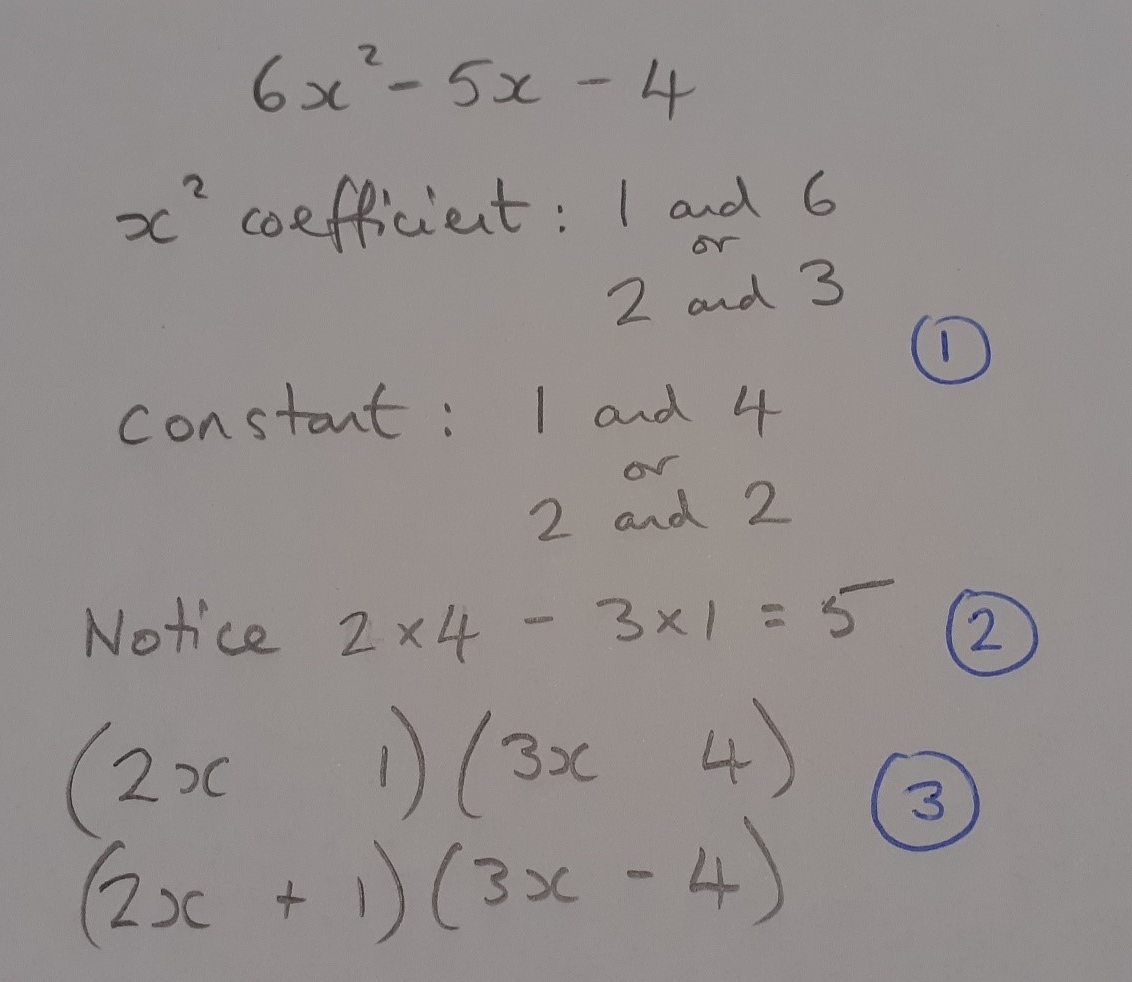 This method was presented to the department by @DevonaldMr who is a big inspection fan since he was taught it as a student himself. If you are good at this method, it is the most efficient and quickest way to factorise a non-monic quadratic. It doesn’t require any memorisation of steps and no reasoning/proof is required to see why it works. However, it is difficult if a and/or c have lots of factors and I’ve found that most students simply don’t like trying to spot it and prefer using a reliable method instead. Personally, I would use this method for easier examples, but I have never managed to get good enough to use it for all quadratics. I asked my Yr12 & Yr13 further mathematicians their preference and about 75% of them said that they use inspection to factorise all quadratics.

This method is very quick. It can be done in just one X and the results pops out surprisingly quickly. I had never seen it until recently and I think it’s based on a Vedic method. The speed and efficiency comes at a price as the method doesn’t promote mathematical understanding. Proving why it works would be a worthwhile diversion, one that I haven’t tried myself yet. I admire its efficiency but would probably be reluctant to teach this method as it goes against our department’s philosophy of promoting mathematical understanding.

I hadn’t seen this approach before, but I really like it. You still have to ‘split the middle term’ but it shows more of what you’re doing that the first method described above. The grid links well with earlier work with area and multiplying pairs of brackets, as well as at AS level where the department’s preferred method of teaching polynomial division is by using a grid.

At the department meeting, following the presentation of the methods, colleagues used some of the different approaches to factorise other quadratics and much discussion followed. The magic X method was very divisive with the debate centred around speed vs understanding. The inspection method was also quite divisive with that debate centred around what we do in our own maths versus what we teach our students. We discussed having a common departmental approach but this was not well received because we different methods would suit different students (and teachers!). Several colleagues were pleased to understand some of the methods that students were using that they have picked up from outside of school from tutors, youtube etc.

In order to gauge the preferred methods of colleagues, I gave everyone 5 counters and asked them to distribute them as they wish between the 6 methods. The results are below.

The grid method was the overwhelming winner with twice the number of votes as splitting the middle term in second place. I placed 4 of my counters for the grid method so I was pleased to see I had backed a winner! I saved one counter for inspection as I do think there’s a place for inspection with easier quadratics as students gain fluency. Poor non-monic to monic received no votes – I think the length of the process put people off. It will be interesting to see how students respond to some of these methods which are new to us. We will be revisiting the topic at a department meeting later in the year for some feedback as of course it will be interesting to see what the students think!

Any comments or questions more than welcomed.

View all posts by geomathsblog

This site uses Akismet to reduce spam. Learn how your comment data is processed.